Why Would I Want to Use It?

If a file is popular enough (and there are therefore enough other users who have downloaded it), you can usually download files at the maximum speed allowed by your internet connection, rather than the speed the server can manage at the moment. Additionally, using BitTorrent is a great help to the owner of the server, especially with small projects with a limited budget, since the server is only required to upload the file when there are few or no other people offering it. Finally, if your download gets interrupted, you can resume right where you left off. There's nothing more annoying than having your connection terminated with 95% of a 4GB download complete and having to start over.

You've probably seen the huge posters that often get put up in libraries and schools talking about the evil file-sharing programs. Most of those are funded by the RIAA, which is a group that likes to sue random people for illegally sharing copyrighted content and then keeps the money for itself instead of giving it to the people whose copyright was actually infringed. Regardless of that, I'm not denying that BitTorrent can be used to download material illegally, but the act of using BT (or any other file-sharing program) is not in itself illegal, and there are plenty of legal uses, such as downloading free software or music that the authors have made public domain or available under Creative Commons licenses.

There are a number of other uses which are in a legal gray area but most people would consider ethically sound. For instance, if you have lost the installation disc for a program that you legally purchased and you still have the license key, you might find a copy of the program and download it. While the company probably didn't intend for the software to be available that way, you aren't avoiding paying for it by doing so.

There are a lot of clients that connect to the BitTorrent network, but two are especially popular, uTorrent and Transmission. For the most part, it doesn't really matter what client you use.

Once you've installed a client, you need to find something to download. Unlike older file-sharing networks, BitTorrent doesn't include a search feature itself; instead, you need to use other services to locate a torrent file, which you can then download and import into your client. (This is what the notorious The Pirate Bay service does.) A torrent file does not actually contain any of the data you're intending to download; instead, it contains information about how to find parts of it.

The Internet Archive recently announced that they were making parts of their collection available over BitTorrent, so I'm going to use something from there as an example. The Archive's torrent search page is here: 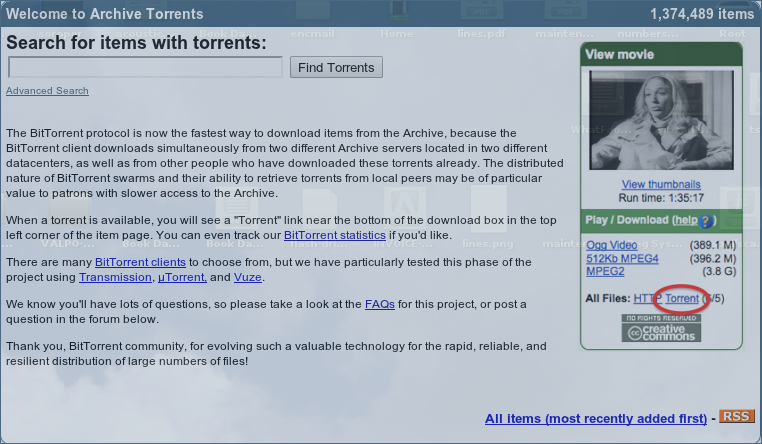 I clicked into 'books' and the 'spotlight item' on the left as an example. This file is actually fairly small, so we're unlikely to notice any speed difference on it, but it's just an example. We can also see to the right ("Possible copyright status") that this book is public domain, so there are no possible legal issues here. 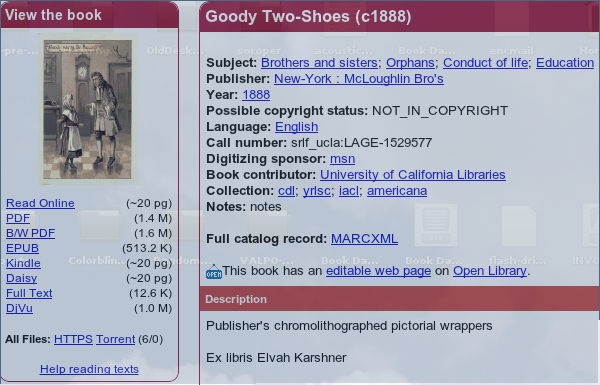 When you find something to download (wherever it may be), download the torrent file (in this case, click the 'torrent' link, then open the file. Your client should come up and open the torrent (I'm using Transmission in this example). In this particular case, there are a number of files available, so we can choose which ones we want. 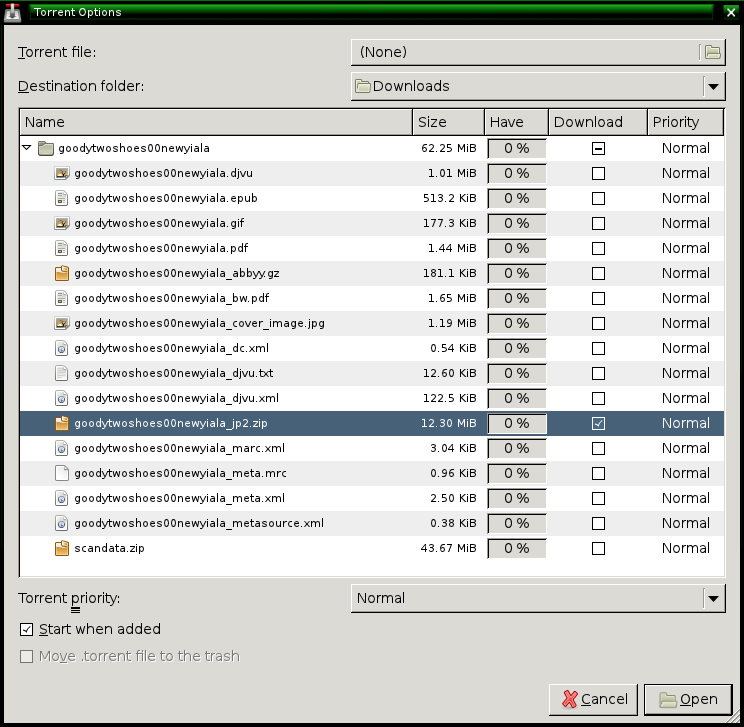 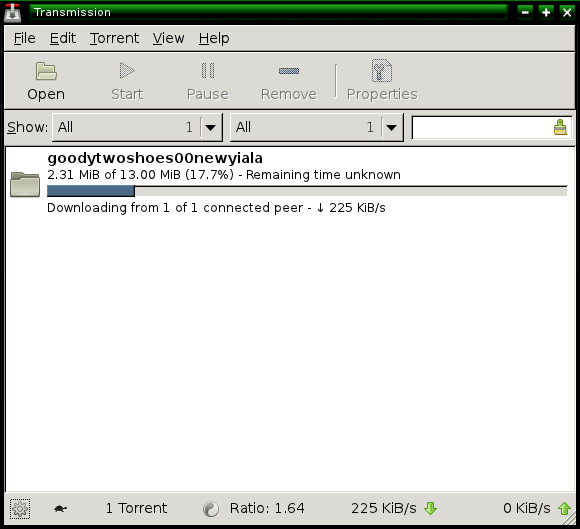 With an uncommon file, sometimes you'll run into a problem where you wind up stuck because no other people ("peers") have the parts of the file you still need, and the download can stall and go idle. 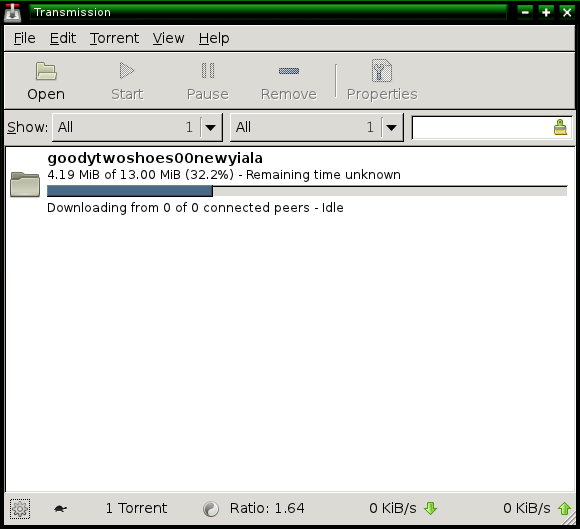 In some cases, like with the Archive, there are official servers that will take over if the file is not available any other way; they just might take a little while to kick in.

When the download is complete, the status display will change to "Seeding." 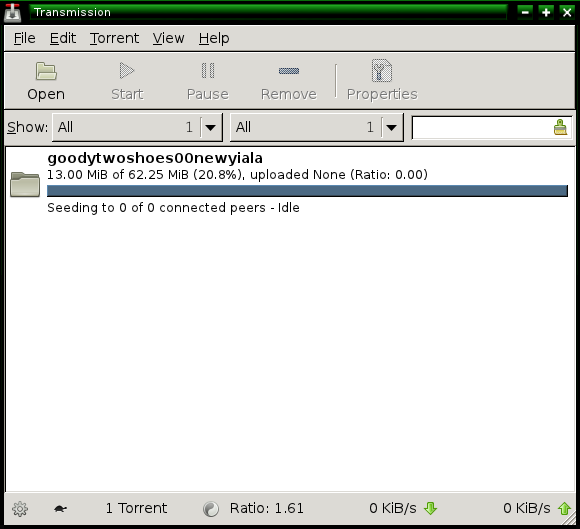 This means that you're now making the file available for others to download. Depending on how popular the file is, your internet connection may slow down as you upload parts of the file; to prevent this from becoming a problem, all decent clients have a speed limit feature built in. You can set that to whatever number you need to keep your browsing and other connections working fine.

It's good etiquette to keep seeding a download until the ratio (on the right side of the file size data in this screenshot) has reached 1.0, meaning you've uploaded as much data as you've downloaded. Although it may seem annoying and unnecessary, remember that you probably downloaded the majority of your file from other people who were seeding it (a small percentage comes from other people who are simultaneously downloading the file in a different order than you). If nobody kept seeding files, you'd never be able to download anything. Additionally, some servers will begin to throttle your download speed if you maintain a low ratio over a period of time, since you're being a drain on the network.

I don't use BitTorrent that often, but it really is handy for downloading large files (one of my most common uses is disc images for software and operating systems, which are usually at least 600MB and often take an eternity to download from the official server). Even if you don't use it much, it's not a bad idea to have a client and know how to use it for the odd case when you find a file that's only distributed via BitTorrent or the only non-torrent servers run at an extremely slow speed (I ran into a server once that was giving me a download speed of 3 KB/s over a broadband connection).